Facebook spent the majority of its early years developing a comprehensive web platform for desktop.

In the midst of a sinking share price, Facebook made a conscious decision to focus on mobile first and the results speak for themselves. What does this mean for your learning?

Facebook spent the majority of its early years developing a comprehensive web platform. It wasn’t until 2012, that the company started to think about mobile first and desktop second.

Facebook had fewer than 20 engineers working on their mobile offering that was updated just two or three times each year (compared to their desktop solution which was updated twice per day). Four years later, Facebook is predominantly a mobile company with 80 percent of the company’s revenues derived from mobile elements – inclusive of Facebook, WhatsApp and Instagram.

Facebook rejected their initial strategy of designing for desktop first and begun allocating more resources to developing mobile than desktop. Today the company is not only surviving but thriving on mobile, with 75 percent of daily users in the US accessing Facebook via phones and tablets.

[Facebook has done a better job of capitalizing on the move to mobile than any other major Tech company.](http://www.businessinsider.com.au/facebook-mobile-only-users-most-common-2015-11)

Facebook’s mobile-first strategy is clearly a success. But why did Facebook redirect its strategy to be mobile-first and how does this apply to your learning?

Over the course of 2012, the company significantly changed its direction to adopt a mobile-first strategy. At the TechCrunch Disrupt conference in San Francisco, Zuckerberg explained why, “For one, mobile is growing. Second, they’re spending more time on it…”

What Zuckerburg realised is that whilst desktop was still the dominant platform, mobile was showing signs of significant growth. He was faced with a decision – continue to develop for the dominant but shrinking platform or focus on that with the greatest growth, potential and engagement. 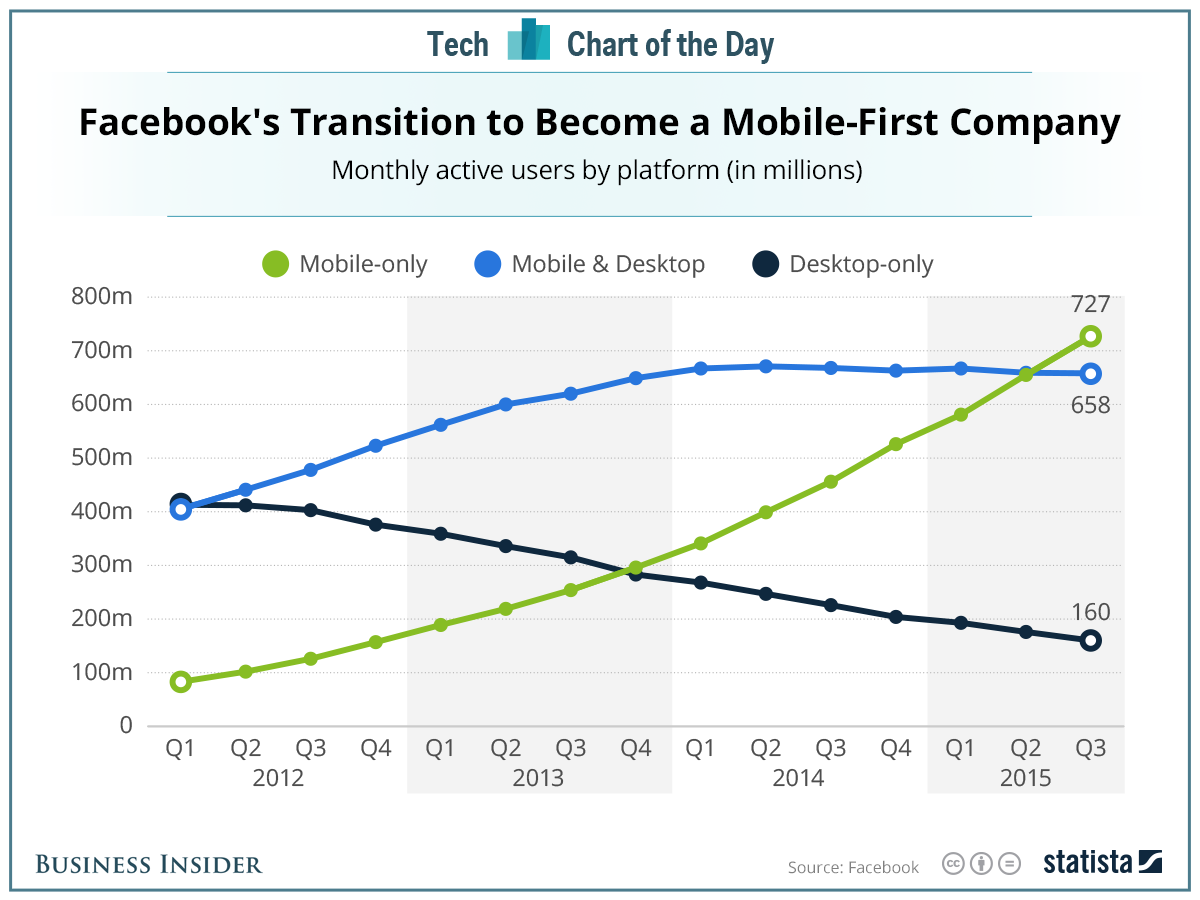 The route they took to get there was probably uncomfortable – upskilling hundreds of engineers, shifting management focus, and changing the direction of a large corporation – but the thinking was undeniably successful. The number of mobile-only Facebook users has grown to seven times that of early 2012.

This is the biggest lesson for anyone creating courses or learning modules… when you get the delivery vehicle right, your users will follow.

What can we learn from this?

When it comes to learning, you may be content with your desktop strategy. Facebook too it seems could have continued down that road. But it wasn’t until they offered a compelling mobile offer that the users then switched in their masses.

Is your desktop based strategy holding your users back?
Are you being told because your lessons are responsive you are thinking mobile? This is very different from mobile-first thinking and the approach Facebook took.

What this means for microlearning

Of course, delivering content on mobile devices with design principles and CSS adapted for mobile is not all that constitutes a mobile-first approach. It is also delivering content tailored to its method of delivery, mobile. When you design your lessons not just by how it fits on a screen but in accordance to how the device is used, your learning content should be micro in nature. This enables your users to complete lessons in short bursts of time found throughout the day. As 80% of people say their phone never leaves their side, learners can complete lessons while in line for coffee or waiting for the bus – a difficult feat with a desktop or laptop.

Looking to the future

Mobile in learning is only going to get stronger. Especially as more and more Millennials now reach for their mobiles before a desktop and the always switched on mentality that comes with mobile enables learning to infiltrate the many micro moments in your learners increasingly busy day.

Millennials have their smartphones with them [22 hours a day](http://www.adweek.com/socialtimes/smartphones/480485) and 80% of those with access to Internet do so from a smartphone.

You too can experience upward growth and favourable learning experiences by reflecting the choices that have delivered Facebook success. With Ed you can deliver the high-end mobile experience users have come to expect and reach the 2-billion smartphone users already in the world.